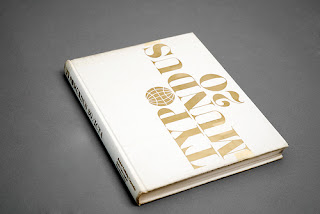 Several features are obvious about the competition, even from a cursory inspection of the catalogue. The first is that, while intended to have been a competition/exhibition of typographic design from the first sixty-five years of the twentieth century, the vast majority of the entries are from the years between 1960 and mid-1964, when the jury stopped accepting new entries. Second, as can be seen in the Typography annuals of the Society of Typographic Designers of Canada, there appears to be confusion/debate about whether the main focus of the profession is typographic design or graphic design more generally. While entitled Typomundus, the entries from the different judges suggest that some of them had different understandings about what should be the focus of their profession.

In addition to reproducing the initial October 1963 call for entries to the competition/exhibition, the book begins with a statement by the Director of the International Center for the Typographic Arts, Aaron Burns, to the jury members. Printed, like the rest of the sections of the text, in English, French, and German, Burns begins by explaining that each of the twelve jury members were selected on the basis of their national and international reputations in the field of typographic design, as well as on the basis of their representing different styles and approaches to such design. Furthermore, Burns rejects any need for the jury members to debate what constitutes "typographic design," claiming such a discussion unnecessary, a position which he claims was justified by the, "reputation and professional status of each of you[.]" (page viii) However, he then continues by explaining the specific rules of eligibility for entries in the competition, and thus, seemingly, what constitutes legitimate typographic design. He explains that the only materials which were eligible were, "letterforms, either calligraphic, typographic or written." Thus, it is clear, that the International Center for the Typographic Arts was still, in 1964, placing an emphasis upon type, and not recognizing that type was only one element of the designs created by typographic, or graphic, designers.

A problem with the international judging process raised by Burns was that not all of the members of the jury were fluent in the languages or cultures of the typographic material being judged. Thus, there would be elements of some of the almost 10,000 submitted designs which particular members would not appreciate, but which might be understood by someone who reads that language, or is familiar with the culture, as significantly enhancing or taking away from the overall design. Burns, however, did not think this linguistic barrier to be a significant problem and claimed that the judges could fairly judge the material, "on the basis of its own form, beauty, appeal and excellence of typographic artistry." (page viii) While he also recognizes that, in addition to overcoming the cultural and linguistic barriers, each judge would be making subjective judgments. Yet, Burns claims that it was the quality of their subjective judgment which caused each judge to be selected to participate in the jury in the first place, and thus, their subjective judgments were valued and respected. He concludes his statement by hoping that the Typomundus exhibition/competition would help set international standards of typographic excellence and encourage the creation of quality designs.

Burns' comments are followed by those of a member of the International Center for the Typographic Arts' Publicity Committee, Marilyn Hoffner. He outlines the development of the Typomundus exhibition, claiming that its entries were intended to represent the typographic design of the first sixty-five years of the twentieth century. Hoffner does not address the problem that most of the submissions were from the 1960s. However, he does outline the judging process, noting that the linguistic differences of the judges sometimes resulted in particular judges being unable to discuss the merits of particular designs. Like Burns, Hoffner did not think that this was problematic, but claimed that "one simply found someone who could talk the language or else 'talked' without words." (page x)

Like Burns, Hoffner concludes with the hope that Typomundus 20 would assist in establishing high international standards in typographic design. He claims that the exhibition/competition's success would be continued in future Typomundus exhibitions/competitions, including one which was scheduled for 1967. No evidence has been found that the 1967 exhibition ever occurred.

Next, the catalogue offers short biographies of all of the jury members, followed by short statements by each. While many of these statements merely outline the judging process and thank the efforts of the International Center for the Typographic Arts, as well as the Society of Typographic Designers of Canada for hosting the event, some do offer insightful comments into the state of the profession, the dominance of particular design styles, and problems or issues with the exhibition and/or judging process.

In his comments, Oldrich Hlavsa from Czechoslovakia claims that the exhibition not only acted as an overview of the various typographic design styles of the twentieth century, but it also showed how different styles and trends had changed and evolved. In particular, he notes that, while there had been a "modest" revival of the constructive typography of the 1920s and 1930s, he claims that the influence of that style was actually diminishing.

The American judge, Louis Dorfsman, claims that, contrary to the view of some typographic designers, typographic design is an art rather than a trade. Furthermore, he argues that it is one of only two practical arts, the other being architecture. While emphasizing the role of type in visual design, Dorfsman's comment suggests that his notion of typographic design was broad than that of Burns. Such a broader definition is explicitly argued for by his fellow judge, Hans Neuburg from Switzerland. At the beginning of his comments he claims that, while a laudable idea, all of the judges apparently came to the conclusion that it would have been better, "to have a wider selection [of designs] on a more than typographic basis." (page xxiv)

In his comments, the German judge, Hermann Zapf, argued that, while the 612 entries which were selected for the exhibition by the jury offer a good survey of typographic design over the first six and a half decades of the twentieth century, the work of many significant and influential designers were not included. In particular, he notes that works by Dwiggins, Updike, Rogers, Mardersteig, Schmoller, Trump, and Schneidler were not included because nobody submitted them to the competition. Thus, while including many laudable designs, one could criticize the competition of a presentist bias.

Finally, Piet Zwart of the Netherlands argues that, in addition to being subjective, and complicated by linguistic and cultural barriers, the judging of the works submitted to Typomundus 20 were also influenced by convention regarding "good" typographic design. Recognizing that influential designs are often initially understood as "crazy," he also notes that, while many of the radical designs submitted to the competition may not have been selected for the exhibition, their significance would become apparent with time.

Interestingly, the comments of the one Canadian judge, Carl Dair, largely only praise Typomundus 20 and the International Center for the Typographic Arts for their goal of creating high international typographic design standards. However, he also recognized that, while one might design with skill and to high standards, a talented designer may not be recognized if he/she does not have access to resources which will adequately exhibit or do justice to his/her designs and effort.

Following the introductory passages and the comments by the judges, the rest of the catalogue is dedicated to reproducing the entries which were selected for inclusion in Typomundus 20. Interestingly, unlike the Society of Typographic Designers of Canada's Typography 64 competition/exhibition of the same year, Typomundus 20 is not dominated by the International, or Swiss, Style.
Posted by Duncan at 2:59 PM